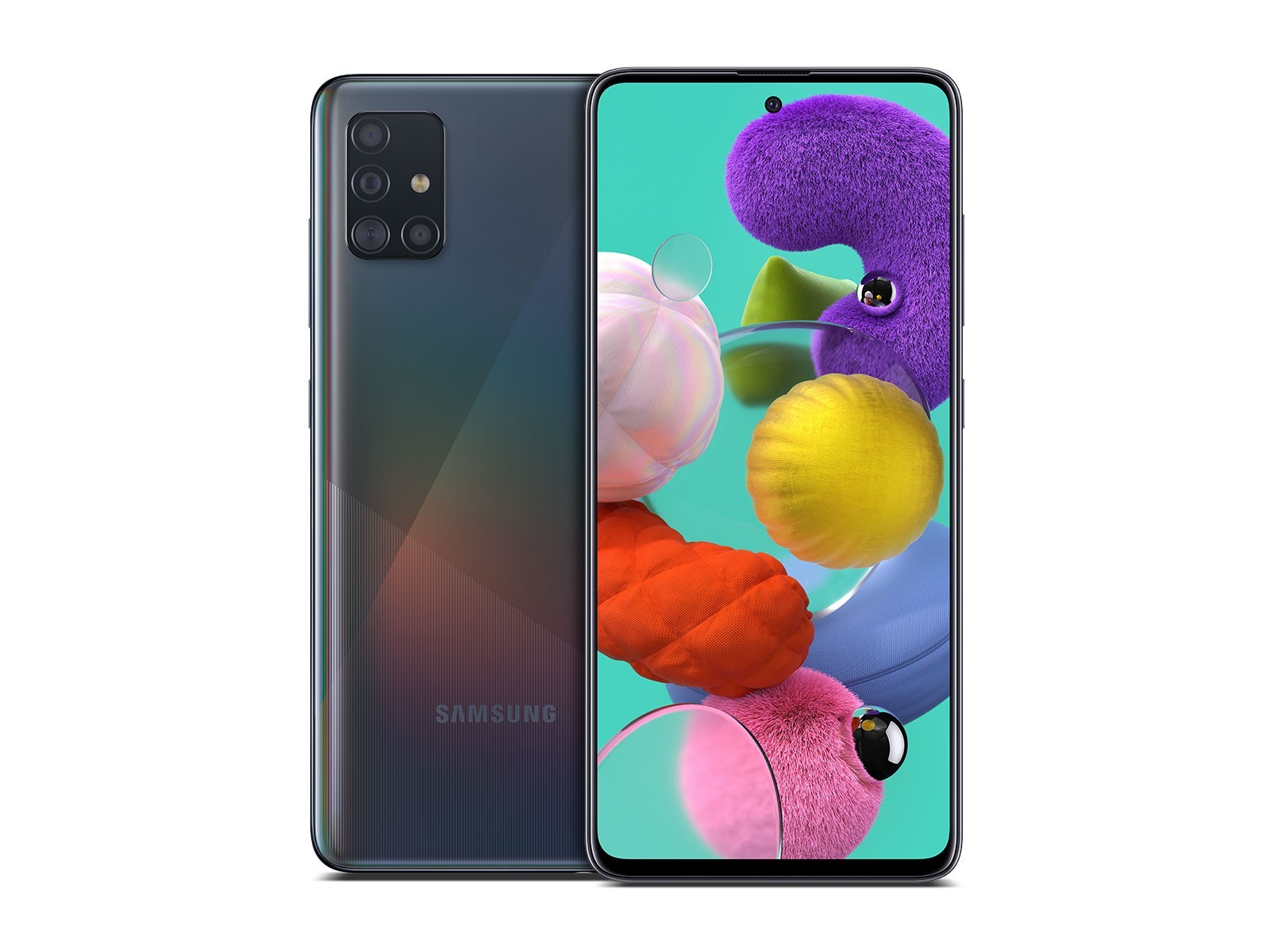 The Samsung Galaxy A51 is one of Samsung’s biggest mid-range entries for 2020. As a very good option for people who want a Samsung smartphone but don’t want to pay $1,000 to get one. For $264, the Galaxy A51 has a lot of competition. There’s the Pixel 3a, iPhone SE with Apple’s newest flagship processor, and plenty of phones from Redmi, Realme, Motorola, Nokia, and more that bring a ton of value to the table. It’s going to take a lot to get customers to purchase this phone at retail price. With so much competition in the mid-range, is it a good option for the price? Find out in In3case’s Samsung Galaxy A51 review.

The Samsung Galaxy A51 is made of “Glasstic”. This gives it a higher quality feel than pure plastic phones, but it definitely doesn’t feel premium, It’s still plastic after all. The phone is smooth but not slippery, and fairly light at just 158g.

The rim of the device is aluminum and feels pretty high quality. On the right, you’ll find a power button and volume rockers, with a USB-C port, speakers, and a headphone jack on the bottom. The left side of the phone houses a dual-SIM card tray, which can hold two SIMs and an SD card up to 512GB. While most phones double up on the 2nd slot to allow for either a SIM card or microSD card, the A51 has two dedicated SIM slots and a separate microSD card tray. That’s nice to see.

The speakers on the phone got fairly loud but lacked any sense of bass. I wouldn’t use the speakers to directly listen to music, though the headphone jack is a big plus. The vibration motor on this phone was very bad. It’s light and tinny and feels almost loose.

I quite like the crazy color and design on the rear of the device. It’s definitely different, and I appreciate phones with interesting colors. It has 4 different color options which are prism crush black, prism crush white, prism crush blue, and prism crush pink.

It has a surprisingly good display. Most mid-range phones use LCDs instead of OLEDs, but Samsung was able to stuff in a large OLED screen with a fairly dense pixel count. This is a 1080p screen. Colors were punchy and bright, which is common for Samsung panels. It’s great.

One annoying thing about this display is the hole-punch camera cutout in the center of the phone. Samsung decided to put a silver metal ring around the camera, which makes it much more obvious than it would be without the ring. It forces you to notice it even when the display is off. I didn’t like this.

There’s an optical in-display fingerprint reader on the Galaxy A51. Unfortunately, the fingerprint reader is slow and inaccurate. It took about two seconds to register my fingerprint every time. Moreover, the accuracy rate seemed to be about 50% while I used the device, which is pretty bad. You might be better off using the pin unlock or even the 2D face unlock option for speed and accuracy.

With a mid-range Exynos chip and just 4GB of RAM, we didn’t expect performance to be great on the Samsung Galaxy A51. After using the device for a while and running our tests, we confirmed our fears.

The Samsung Galaxy A51 is slow. You can feel a delay opening apps and multitasking, and there would often be stuttering while swiping around the UI. The phone used 1.9GB of the 4GB of available RAM even with all apps closed, which is a pretty bad sign. I would prefer if it was a 6GB of RAM instead of 4GB of RAM because modern versions of Android need about 6GB of RAM to run smoothly.

The Samsung Galaxy A51 has a fairly large 4,000mAh battery. With a low-powered CPU and a small amount of RAM, you’d hope the device would get killer battery life. And honestly, it wasn’t bad, but it wasn’t as great as it should have been. The phone lasted about 29 hours. I got about four and a half hours of screen-on time on this device.

The A51 supports 15W charging, which isn’t the fastest. Considering the original Google Pixel supported 18W charging in 2016, this feels a bit sluggish for 2020. Samsung’s flagship Galaxy S20 devices charge at 25W by default these days, so I would have liked to see 18W at the minimum on the Galaxy A51.

Dynamic range seemed good on this camera set, though it did feel like the photos were a bit underexposed, probably to avoid blowing out highlights. That being said, some camera systems can force the shadows up too much for the sake of dynamic range, which produces an annoying gray haze in the shadows. Samsung phones have traditionally done this, so I was pleasantly surprised to see the A51 did not.

Colors were generally good, but the A51 tended to oversaturate specific colors such as blue and green far too much. This is likely to make the sky and plants pop, but it made some images look a bit cartoony. Samsung has always done this with its camera systems, though, so I’m not exactly surprised.

The depth sensor seemed to help quite a bit, and I’m glad it works on more than just people and animals. While the bokeh could definitely look a little more natural, object detection and cutout was pretty accurate. I was pleasantly surprised. Hair detection remained fuzzy, but that’s common with artificial bokeh. This mode also tended to soften skin more than I would like.

The selfie camera was quite good as well, with decent dynamic range and color. Sharpness was pretty good, though it still over-saturated colors like green and blue.

The Galaxy A51 offers a sensible package of features and performs well in most key areas. It’s one of the lightest handsets in the segment while still having a big display and doesn’t sacrifice battery life in the process. Typically for a Samsung, the A51’s display leaves little to complain about too. A thorough upgrade in the camera department means good daylight photos from all cameras, with particularly great portraits and a ‘macro’ cam that’s hard to beat. The up to date software at launch, complete with added features which used to be reserved for the flagships until only recently, rounds up a compelling list of pros.

The thing is, though, competitors have all these boxes checked too, and then some. Pretty much every phone for the money will come with a more powerful chipset, and you’ll especially appreciate it if you’re into gaming, but future-proofing is also a valid concern. Samsung’s not too keen on making its midrange cameras shoot too great in the dark, while others don’t necessarily pull their punches quite as much.

In the end, with such a price of $264 as a pro, good display, and good camera you will be able to decide if this smartphone worth it or not.